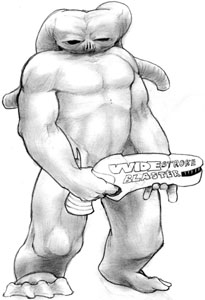 Gear is listed in the following sections:

The weapons and equipment listed are those that can be found in most modern AIF societies (and are most likely produced by NastiDyne).

The number of dice plus modifiers to roll for damage on a successful hit. It should be noted that weapons capable of inflicting 18 points of damage or greater in one attack are considered "assault" and most likely will not be allowed in bars. If a weapon's damage differs depending on if the target is a robot or a biological being, both damages will be shown seperated by a |. The first damage is against biological beings, the second is against robots.

The cost in credits to buy this weapon.

The force in Newtons that is inflicted to the target on every hit. The person using the weapon must be able to produce force equal to or greater than the force of the weapon to use it without bracing themselves. If the target is against a solid surface, then each 1000 Newtons of force inflicts an extra 1 point of damage.

Stamina is the amount of damage the mechanism of the weapon can withstand. Below zero, the weapon is non functional. At a negative greater than it's stamina, the weapon is irreparable. Robotic patches can repair weapon damage.

Armour, if present, is the amount of cladding protecting the weapon and can be repaired by both robotic and biological patches.

How this weapon effects armour. Possible values (with example weapons) are:

These effects only apply to the scale of the weapon, and one scale up. Thus, a personnel scale penetrating weapon will push damage through intermediate scale armour, but will splash ineffectually against ship scale armour.

For rapid-fire weapons, the multiplier value signifies how fast the weapon fires. With these types of weapons, the multiplier can be used for either increased damage or a bonus to hit. The decision to convert the damage to a bonus to hit can be made during the attack once the attacker knows how much he needs for a successful hit. This is because the attacker can see where the first weapon discharges land and adjust accordingly during the spray of fire to land the remaining shots.

For example, an attacker using a 1Dx5 weapon misses his target by 2. He uses 3 of the multiplier to increase his attack roll to beat the target by 1, leaving the damage inflicted to be 1Dx2.

Additionally, a rapid fire weapon can be spread amongst multiple targets. The attacker can choose how much multiplier is used on each target.

Weapons designated as stun will inflict virtual damage. These weapons are intended to incapacitate a target without killing them. The target will regain lost stamina after about an hour has passed.

Most weapons can have common enhancements included for additional credits. Weapon specific enhancements will be listed in their description.

Weapons can be fitted with 20 stamina of armour to protect them. Weapon armour can be fixed by either mechanic or biological patches.

A Technician can fit a weapon to it's owner to make it easier to use and give it a bonus to hit. Most weaponry stores have one or more technicians on staff available for weaponry fitting, though this is up to the referee. While the amount of credits the technican charges to give a weapon a bonus to hit varies, the following rates are typical.

The higher bonuses require higher stages of technician as described in the occupation, and often a store will not have the higher stage personel. Most weaponry stores will be able to provide a +1 or +2 to hit, but higher than that is up to the referee.

It should be noted that referees may deduct from skill earned if a player uses an artifical boost to their bonus to hit.

Force generators can reduce the recoil on a weapon, while leaving the force coming out of the business end intact.

A scanner mounted on the weapon for when it is used 2-handed. The basic scope increases the weapon's accurate range by 100 meters. Targeting can be added at a slightly less expensive cost than the equivalent targeting tactical scanner.